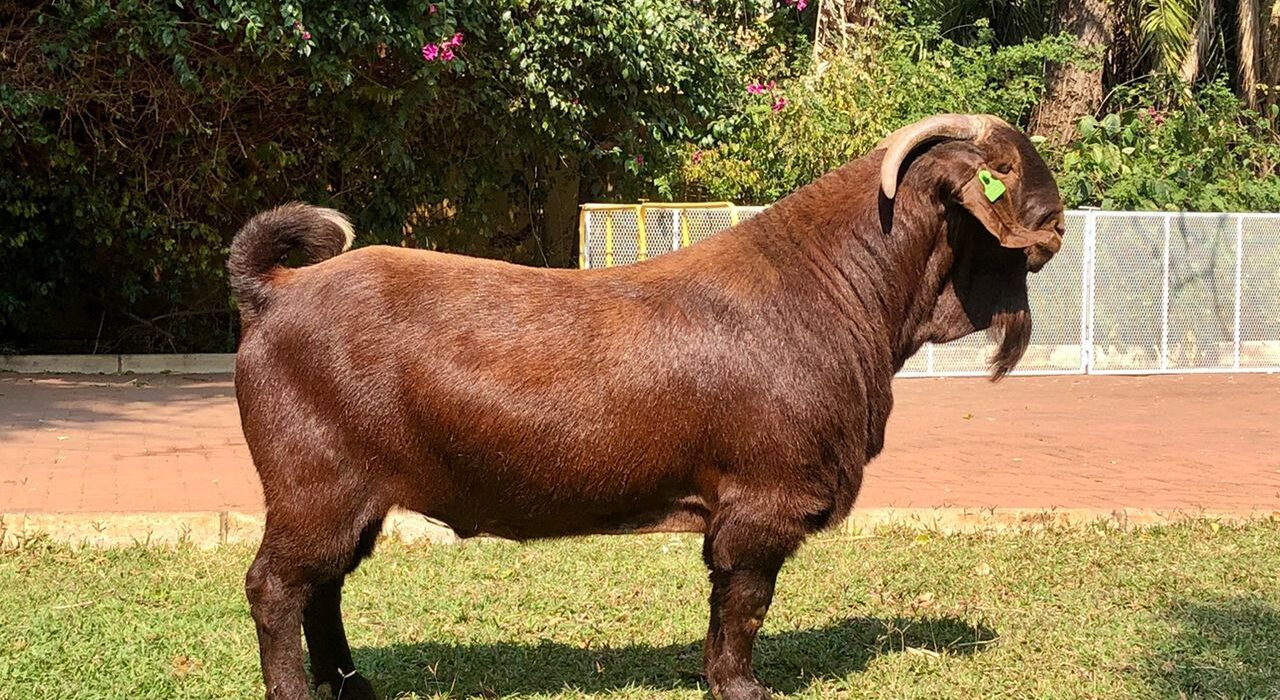 · New Botswana Record Price for a Kalahari Red Buck for P88,000.00, sold to MJ & Rulé Ernst of Bonisa Kalahari Reds Stud via online bid, for export to South Africa; the record breaks a previous Bushra Stud record of ZAR75,000.00 direct to RSA in 2018

GABORONE – Excellence and sublime pedigree were the name of the game for Bushra Stud at the Botswana National Sale held at Stockman’s Choice in Tlokweng and hosted by Nico Vos of Stockman’s Choice. Bushra sought to deliver further on its renowned #UnrivalledGenetics and #UnmatchedBreeding and did just that in bringing the very best Kalahari Reds and Boer Goats, as well as a number of tremendous firsts for the market. The results transcended even those from the incredibly successful Bushra Stud outing at the Voorslag Auction in Letlhakane in June of this year.

New Botswana records included sale of a Kalahari Red Buck for P88,000.00 with Bushra breaking its own previous Botswana record, also making this the first export of a Botswana animal to South Africa from a Botswana auction; and a new Botswana record price for a Boer Goat Female for P70,000.00, also breaking a previous Bushra Stud record. Building on firsts previously delivered by Bushra, all goats were inspected by a Senior Judge from South Africa before going under the hammer, all bucks were fertility-tested and all does scanned for pregnancy, with requisite certificates to support this. A new first for this year which had buyers chewing at the proverbial bit as yet another affirmation of the calibre of excellence was the fact that all animals sold on the auction came with 30-day insurance cover at NO cost to the buyer. The insurance was provided as a value add, covered by Bushra, on the value at the fall of the hammer.

Said Faheem Kala, “After months of hard work, we are delighted with the results of the National Sale, and so proud of our Bushra Stud team. As a challenge to ourselves as well as a view towards contributing to the growth of the local smallstock industry more, we took a decision earlier this year to always put some of our best animals up for auction, thus sharing those bloodlines with fellow breeders as well as propelling us to invest in new animals. Thus, at this National Sale, we brought our very best, determined to deliver quality for quality, and we are so happy to see this has paid off. The journey continues and we are excited for what the next few months will bring, including our next auction in November of this year. Watch this space!”

Bushra Stud had a total of 5 international bidders buying on the sale, a testament to the quality of Bushra Stud and its stellar reputation now well beyond Botswana’s borders.

The full Bushra Stud sale results are per the below:

Concluded Sethula Sethula of Bushra Stud, “We are very happy with how the Sale went after much hard work these last few months. We congratulate everyone at Stockman’s Choice for yet another fantastic auction hosted, with true professionalism and standard of excellence. Last but not least, we share our congratulations and heartfelt thanks to all who supported us as we continue to strive towards delivering UnrivalledGenetics and #UnmatchedBreeding, and to moving the local smallstock industry forward.”

Bushra Stud will next have animals on auction on the 20th November 2021 at the Tholo Holdings & Grandin Stud sale.