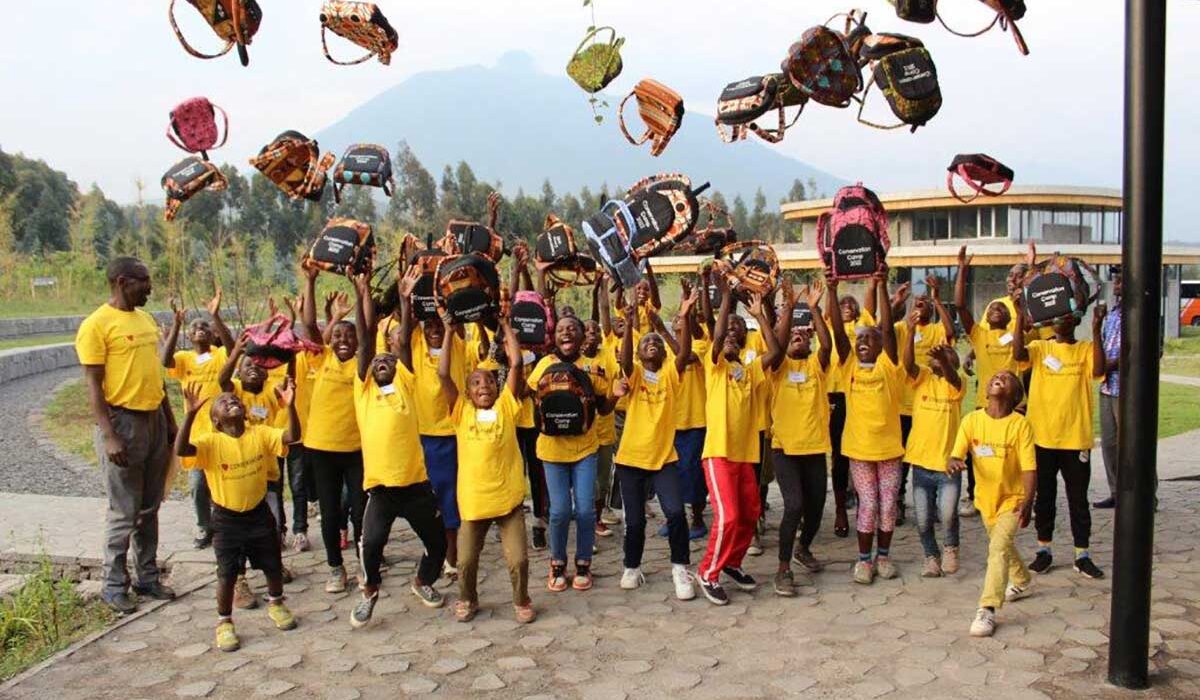 The students were divided into two groups of 40, each participating in a three-day programme. Early each morning the children were collected by bus from their respective schools and transferred to the Ellen DeGeneres Campus of the Dian Fossey Gorilla Fund, where a number of the workshops took place.

At the end of the day the same buses took the children back to the Bisate, Kabara, Rushubi and Kabwende primary schools. All the children were selected because they are members of the Environmental Clubs at their schools, and being in P6 this school year means they will continue on to secondary school in September, at the end of this school holiday.

During their workshops, the students learned about gorilla behaviour and ecology, the different national parks of Rwanda, threats to biodiversity in Volcanoes National Park and actions to help protect it, plus the importance of birds in ecosystems. There was also time for arts & crafts, many different games and songs, and of course snacks and meals, which were very popular.

On the third day of both camps, all the students had a chance to visit Volcanoes National Park Headquarters, and took a field trip to Buhanga Eco-Park, which is a forest of hidden treasures of biological and cultural significance to Rwanda, and especially the surrounding areas of Volcanoes National Park. Buhanga Eco-Park is located in an ancient and sacred site that was used for the coronation rituals of Rwandan kings. At the start of the trails the children were divided into different teams and set on a Scavenger Hunt, with assignments on what to look for in the park and what to identify.

The closing ceremony of the Conservation Camps took place in the presence of Innocent and Augustin, the Executive Secretaries of the Kinigi and Nyange sectors, the Headmasters of the four schools, and journalists from the local newspaper and radio station.

Rosine Uwase, a student from Kabara Primary School said: ‘I like how we were taken care of and loved learning about Dian Fossey. How she was a small girl like me and already passionate about the environment. I now know I can make a difference too’.

Theogene Manizabayo from Bisate Primary School mentioned: ‘I liked all the people who organised the Conservation Camp because they taught me how to protect and conserve the environment. This will help me to teach others how important this is’.

‘I especially liked the food’, said Emmanuel Ntivuguruzwa from Rushubi Primary School. ‘I now know all the names of the national parks in Rwanda, and the animals that live there. Let us do our best to protect them like our family’.

The very first – and equally successful – Conservation Camp in Rwanda took place in 2019, but unfortunately the scheduled 2020 and 2021 programmes had to be postponed due to COVID regulations. ‘We are absolutely delighted that in 2022 we have been able to continue with the Conservation Camps! To ensure that the students who missed out on the previous years could participate before they head to their secondary schools, we decided to make up for the missed programmes by running two back-to-back camps this year. We are now back on track for hopefully many years of Conservation Camps to come!’ added Aline Umutoni, CITW and Community Co-ordinator for Wilderness

Children in the Wilderness (CITW)childreninthewilderness.comCITWRwanda